Girls With Slingshots (...and Boys with Feelings)

One of my fave webcomics of the moment is Danielle Corsetto's Girls with Slingshots.  It's a sort of ongoing slice-of-life comic about a group of friends (and enemies?), centering around a main character who is a struggling writer.  I enjoy it because it's beautifully drawn, very often full of bawdy humor, and, like most great comic strips, manages to do all of that and still have a lot of insight into the human condition. Add to that the fact that it's got a bunch of queer characters, isn't just white people, and manages to somehow insert into a fairly realistic world a talking, alcoholic cactus and a ghost cat, and, well, it's just a winner.

As the title of the strip might indicate, it also delves into gender stereotypes quite often, mostly in funny, subtle, and positive ways. Lately part of the storyline has included Hazel, one of the central characters, having to "grow up" a little, as folks around her are doing some growing, and she's beginning to be left behind.  And one of the most fascinating things to come out of this plot, for me, has to do with seeing men in the strip behave in ways that we don't often see in pop culture--Corsetto shows us that there are men who are working on growing up, and looking for partners who are ready to grow up as well:

Compare this with the ubiquitous trope of men-who-won't-grow-up that we see so often, and you have a refreshing view of men as (gasp!) mufti-faceted human beings.  The cherry on top of all of this is that Corsetto has a real handle on the fact that men are currently dealing with shifting ideas of masculinity--men are more often recognizing that they can have emotions, and express them, but we also exist in a world where we're not quite comfortable with all of that yet.  So, when Zach heads to the bar, hoping he'll see his buddy there so he can talk about his life, he gets some friendly ribbing for it, first from the bartender:

...and then from his friend:

But then he does get to talk about his feelings, like, y'know, a person:

It's realistic, and refreshing, and I wish more folks explored this stuff in comic strips. Go check out Girls with Slingshots.  Heck, go buy some stuff from Corsetto!
Posted by Jeff Pollet at 10:09 AM 1 comment: 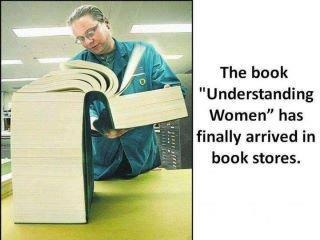 As I go through my day, I often run up against some sort of subtle sexism.  Sometimes it's not so subtle, of course, but oftentimes it's not the in-your-face-angry types of sexism that get under my skin; rather, it's the more insidious kinds of sexism that gets to me.  Of course, as a guy, I'm often not suffering directly because of this sexism--but I would add that a lot of women don't suffer directly from subtle forms of sexism.  Instead these kinds of everyday sexism create a kind of  conceptual background within which we all live, and, to the degree that the background is sexist, we have to live within it. To the degree that it is subtle, it's difficult to call people out about it.

This picture was put up as a "joke" by a guy that I know to be a smart, worldly man who has done a lot of thinking about (among other things) gender.  It's part of a basic trope that I hear echoes of all the time:  "Women are complex.  Men are simple."  I think it's pretty sexist--it's part of the whole "Mars vs. Venus" line of thinking which oversimplifies sex and gender is so many ways that it's difficult to know where to begin when criticizing it. (Ok, a beginning: There is more variation between individual men and between individual women as regards behavior than there is between women and men. )

I think it's often a good idea to point out this kind of everyday, subtle sexism, because it's exactly the kind of sexism that well-meaning people want pointed out to them--I try to appreciate it when folks point out that I'm using sexist (or racist, or homophobic, or whatever) ideas especially when I'm just not aware of them. Unfortunately, this sort of thing doesn't always play out so well for me; when I pointed out the sexism involved in the picture, it was not well-received, even by a guy who has a lot of experience with social justice issues and oppression.

So what do you folks do when you run into everyday, subtle sexism?
Posted by Jeff Pollet at 10:40 AM 7 comments:

This looks like it will be a fascinating documentary about a men's group in Idaho. I'm kind of suspicious of men's groups, as I think the idea of  "raising up" masculinity, even alternative masculinities, as a central goal for men, can be misguided. That said:  Men creating alternative, less-harmful masculinities? All good.